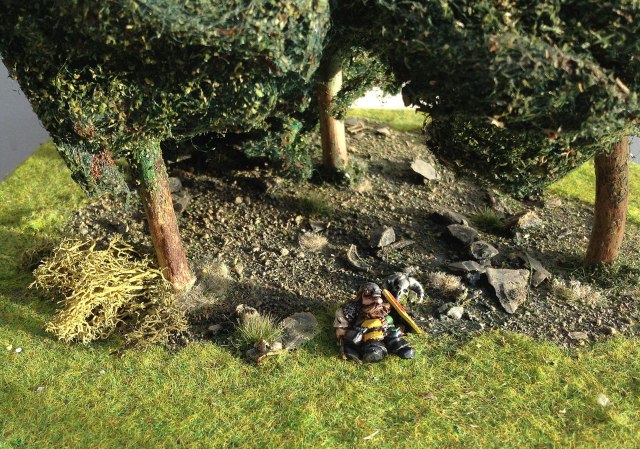 a small game of Oldhammer. In the scenario the devious robber baron Alban von Edelhahn is returning to his estates with Suben Blackmountain – a dwarf hostage he plans to sell for a nice, big ransom. However, on their way back

Alban and his retinue is attacked by Nazgob – a minor, equally devious, goblin chief who is on the prowl with some of his goblin and snotling warriors.

I needed a mini to represent Suben Blackmountain and this gave

me a chance to paint a resting dwarf I’ve had in my leadpile for a while. Actually I’m not entirely sure what the deal is with this dwarf. He may be a casualty but he rather looks like a resting dwarf stirred in his sleep. Hence the name for the small scenic shot here.

I’ll be back soon with snotlings galore!

It’s been a while. I’ve been swamped with work and only found time

to do some short paint sessions since the beginning of the month. Sadly this appears to continue

at least for another few weeks, but I’ll probably be able to fit in some occasional painting. At least that’s what I hope. I have 18 eager snotlings awaiting my brush on the workbench, but more

Here you see what I have almost finished. Five gobbos – the oldest is the little fella in the middle. A so-called Lesser Night Goblin sculpted by the Perry twins around 1983. I have quite a few of those in the leadpile and I for some reason really like these gnomish goblins. They are quite different from the Citadel goblins we came to know from the mid-80’s but their minute appearance certainly is charming and I would really like to do something more with these lesser goblins.

Then you see three goblins from around 1987. The one with the shield and the chap holding a spear are excellent sculpts while the one with the bow is suffering from some awkward details and a slightly, unintentionally deformed face. He looks good from a distance but the sculpting doesn’t really hold up to closer inspection.

Finally the one on the far right is a Crooked Claw Goblin. A decent mini, although the body perhaps is a bit too rotund or trunk-like, but nothing which should keep you from getting one yourself.

There is not much to say about the paintwork. The skin turned out slightly lighter than intended but that’s how it goes with my greenskins. They seem to end up a bit different each time, which is probably because I don’t really have a preferred method to do the green skin. I added some poppie-like flowers to two of the bases. 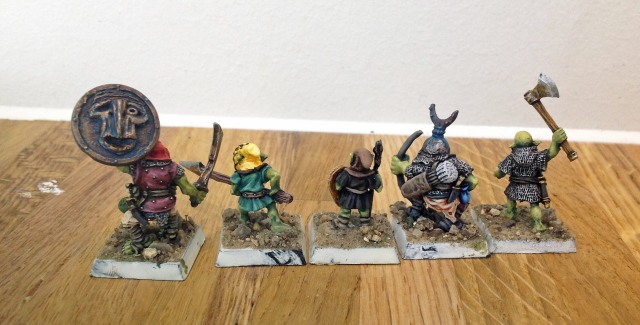 part and something which I even might do tonight.

This weekend we finally played Marktag Bloody Marktag and as the amateur I am, I of course forgot to bring my camera. I took some photos with my phone but they ended very random and of poor quality. Alas, what turned out to be a quite fun endeavor was left undocumented. Oh well. I’ll try to do something with the pics I did take and probably make some sort of proper presentation of the scenario at a later stage. Right now I need to digest the whole thing for a while.

But let me tell you this, the monks of St Gotthard never saw what hit them. The undead force attacking the monastery came crawling through the dusk and took the poor monks and their guests by complete surprise. They never managed to organize their defenses and the skeletons and ghouls attacking thus ploughed through their opponents, setting fire to buildings and spreading fear. It was quite cool actually, although Rasmus playing the monks gradually lost any hope of repelling the attack.

After last weekend I haven’t touched a brush but my appetite for new projects is already slowly returning.   However, here you see the five last monks I finished before leaving. If you have been following these posts you’ll probably know the drill. The colours are the same and the manufacturers are also more or less so. From left to right you see a monk from Black Tree Design, an old Metal Magic monk, One of Foundry’s “jolly monks”, and the next one is another fella from Black Tree. Finally we have a cleric from Citadel. Frankly I’m not sure if this is a man or woman. I always assumed it was a woman and in our scenario we used her as the nun Ulrike Herberiner. Nevertheless while painting the mini I started to wonder if this indeed is a woman. It could easily be a slightly feminine chap. Well, she/he is a nice mini although the use of crosses in fantasy settings always seems slightly odd.

Any thoughts on the monks (and nun/cleric?)?

Up next on my workbench is this lot of fierce, delightful goblins. A nice mix of old, very old and very recent minis. This is going to be a nice change of pace after having painted monks and adventurers these last two months.