Here are the latest miniatures that I have been working on. I mixed bag of warriors. First of we have three men of the North. Two of them are Foundry recasts while the last, the one with the falcon, is a Citadel original. I kind of like these Norse miniatures. The guy with the bird is definitely an old favorite of mine.

Most of them are fairly simple and in fact a lot of them look quite alike; long hair, mustache, furs and sword or spear. Nevertheless they have lots of attitude and it would be great to compile a Norse warband of some sort. Come to think of it – perhaps I should try to do a scenario of some sort where Norse men raid a Norse dwarf settlement or something. One could even throw in some trolls and gnomes to keep up with the Scandinavian theme… 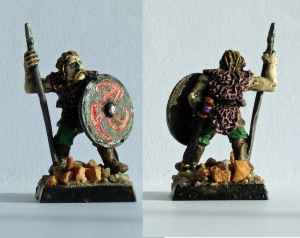 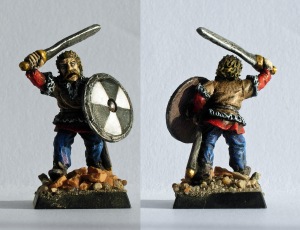 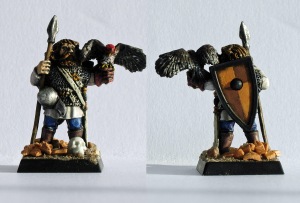 Then we have two fighters – one from Citadel (the winged helmet) and one from Marauder. I really like these unspecified fighters. They frankly reek of adventure and pulpy action. Lots of Citadel’s warriors from the 80’s are as over the top and wild looking as the contemporary chaos miniatures. I think this guy here with the winged helmet is a good example of exactly this. 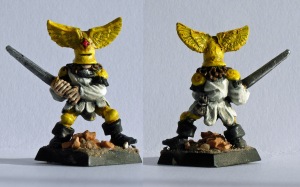 Finally we have a somewhat more modest Marauder fighter. Not too much to say about him; very simple and a very simple paint-job. Oh ya, by the way, the motif for the shield was taken from one of the banners shown in the first medieval fight scene in Highlander. This is the level of inspiration which grows out of watching geekie movies while hung-over. 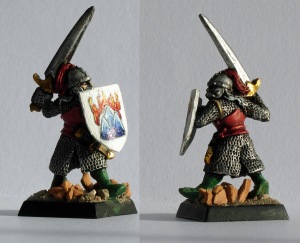 By the way, none of the bases are finished.

This weekend Claus and I were in Hamburg to the annual Hamburg Tactica event; one of the largest tabletop wargaming events in Northern Germany. It’s a great venue with lots of small and large games being played. This year’s theme was D-day and several WWII games were going on as well as a massive diorama of one of the landing beaches (I’m not sure which). However one could also enjoy and participate in a huge number of games set in other historical periods as well as Sci-Fi and fantasy games.

Of course a large number of stores, retailers and societies show up with stalls and stuff to sell. All good and a great way to spend a Saturday. That being said, this year we really hit the bring-and-buy section of the venue. I think we both managed to do quite a lot of good bargains. As you can see from the last image we gathered all our stuff for the fun of it. A joyous sight, right?

I made it back to Denmark with some nice 80’s citadel miniatures: 2 Chaos warriors, 15 skavens, a wizard, a ghost, a knight with horse. To this you can add some other stuff and minis, but my greatest purchase was a Mighty Fortress in mint condition and still stored in the original box. I got it for next to nothing (20 Euro). Hurra! 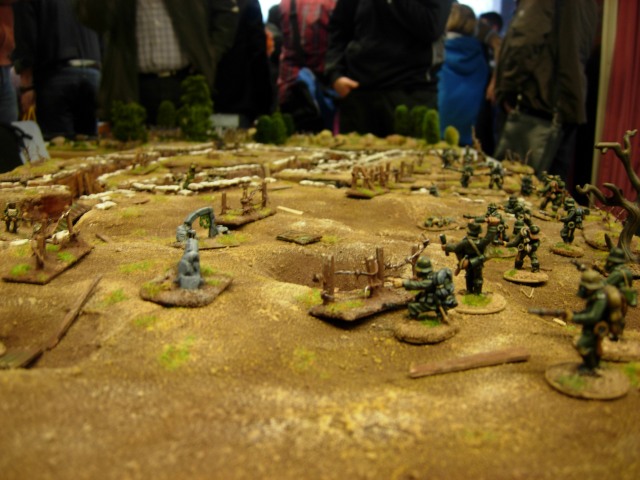 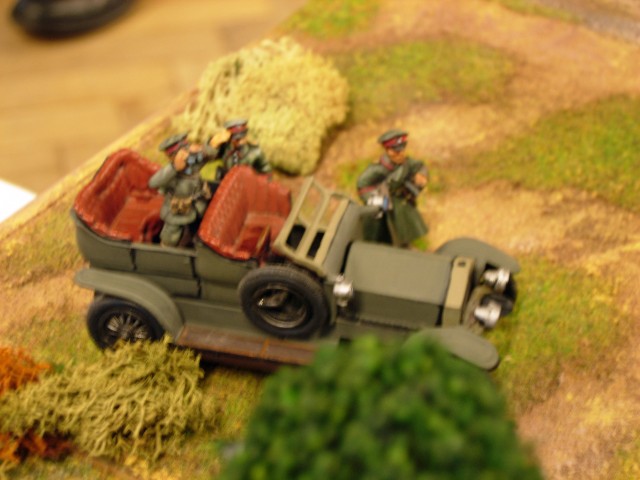 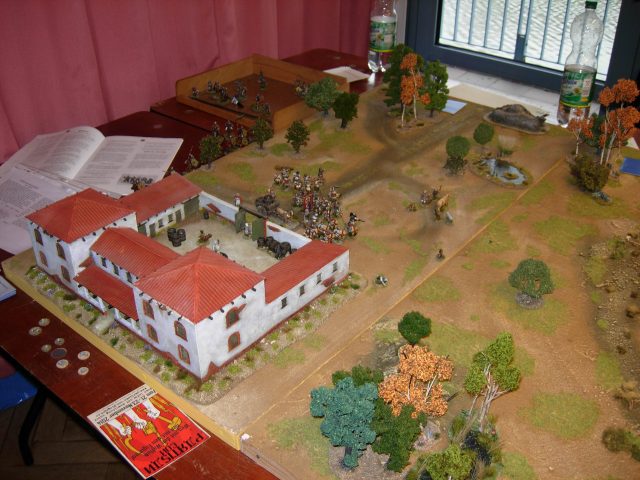 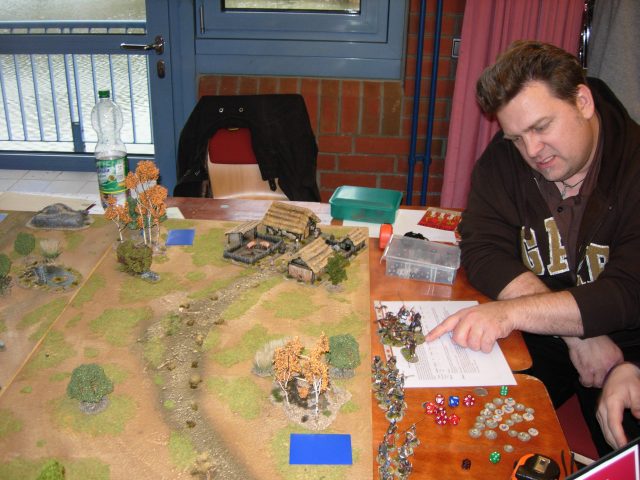 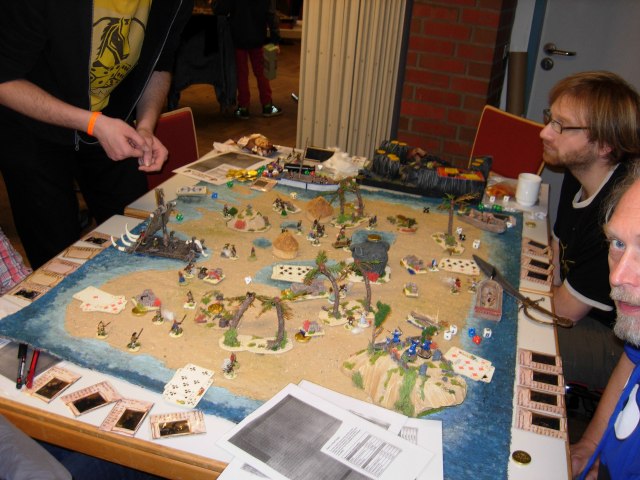 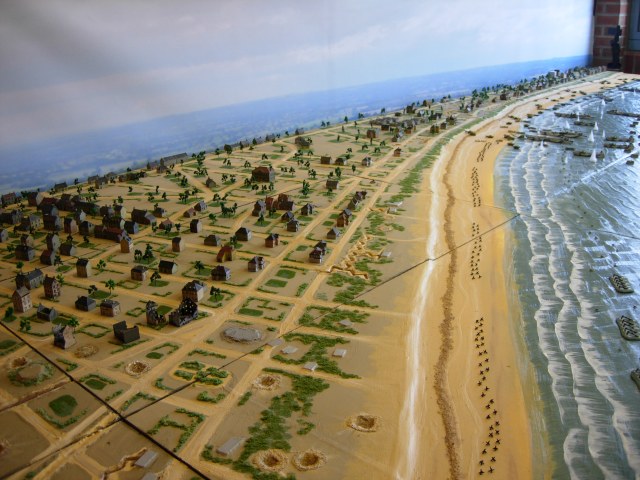 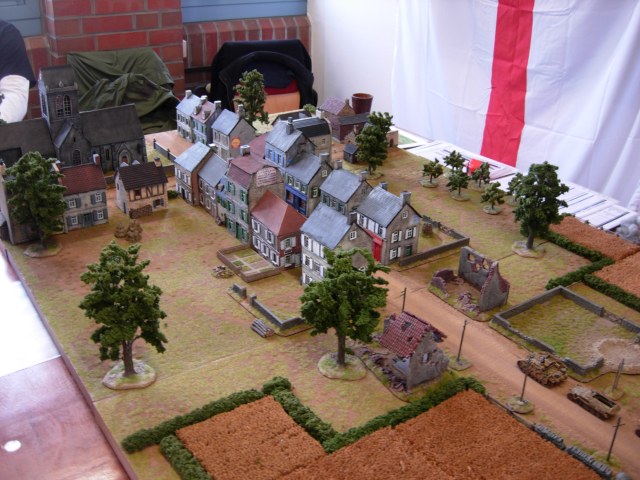 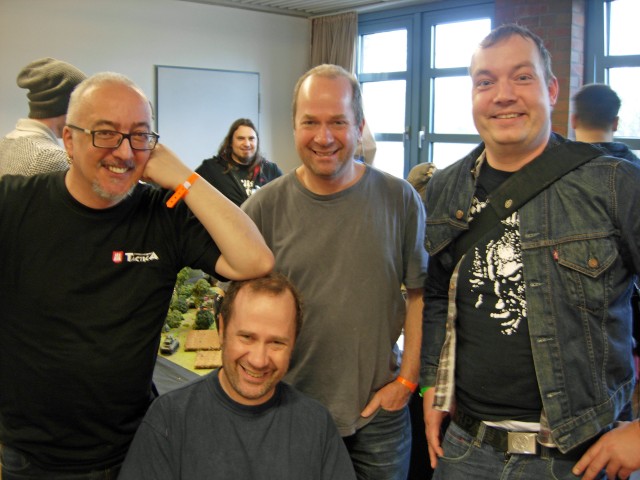 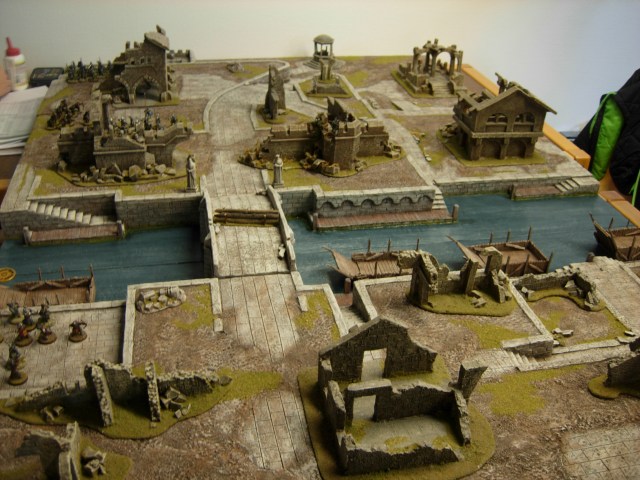 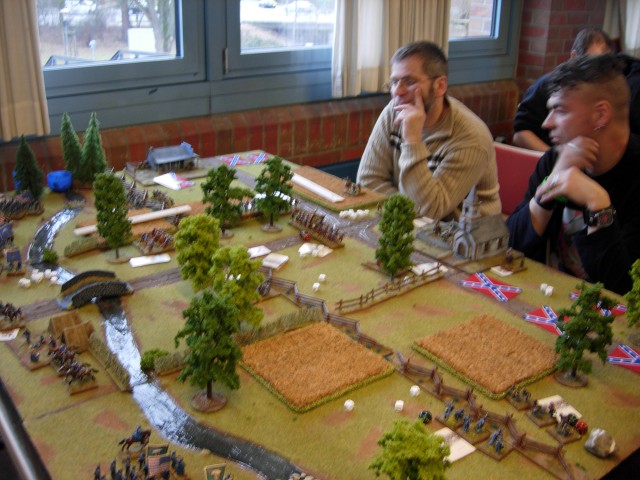 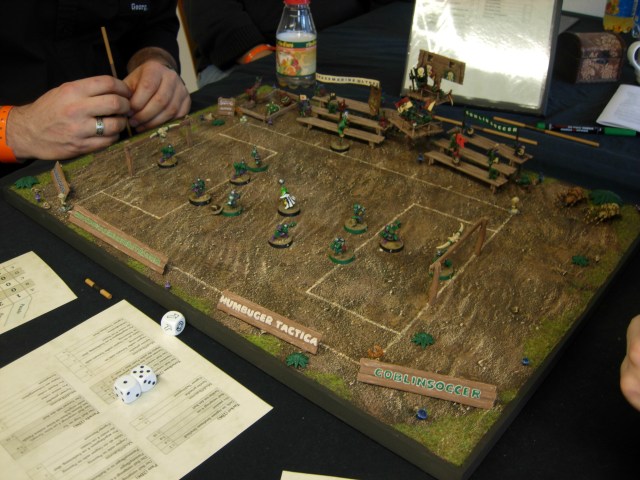 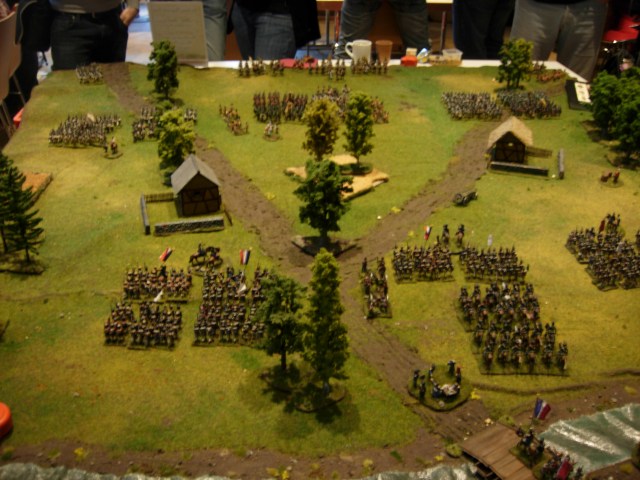 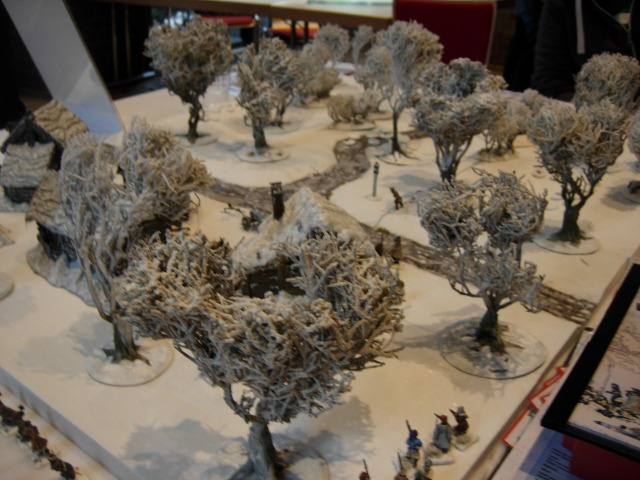 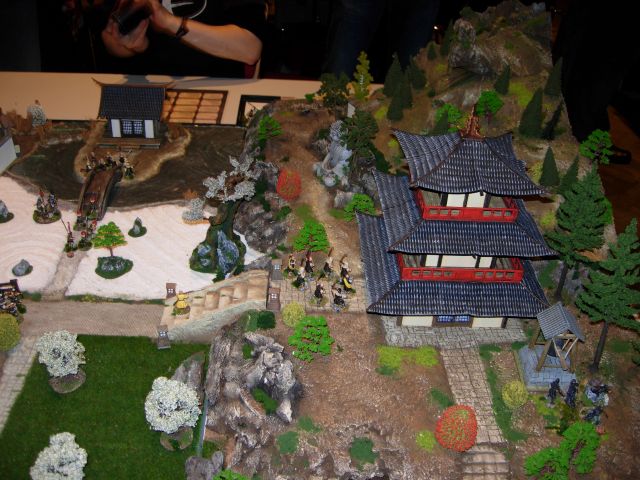 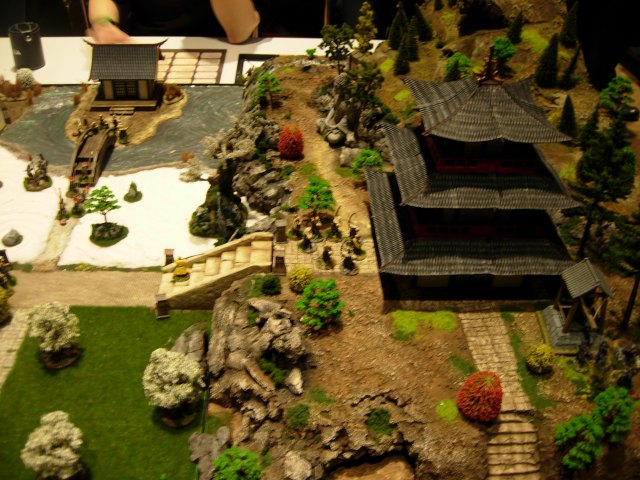 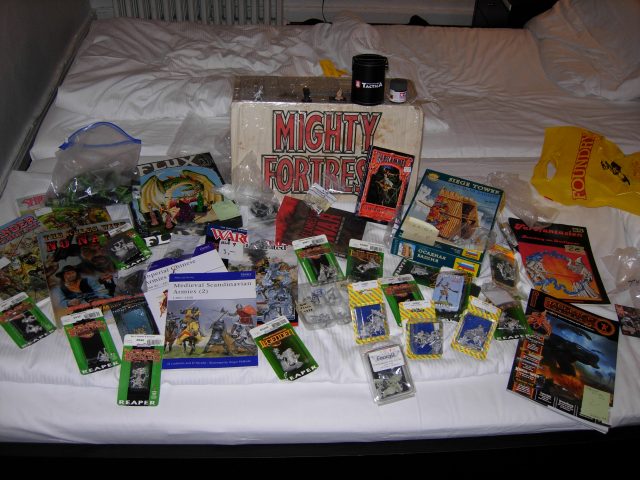 Lately I have started painting again after a few weeks without swinging the brush. I finished five dwarfs – a quite mixed bag really. Three old Norse dwarfs and an Imperial dwarf. I really love the Norse dwarfs; they have so much character. The Imperial dwarf with the odd, almost fly-like helmet is a quite strange mini, but I like it. One could easily paint him up to be a chaos dwarf for instance which undoubtedly would look cool. 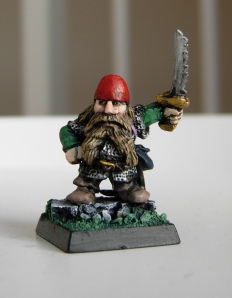 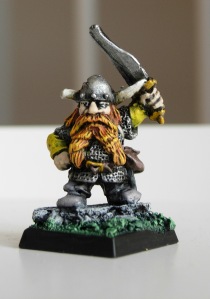 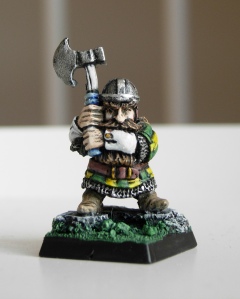 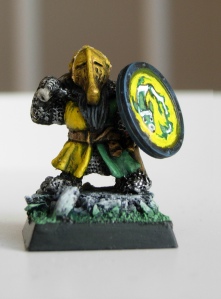 The last dwarfs is a really old, pre-slotta Citadel dwarf. I bought five of the on Ebay for next to nothing do to some minor damage on all of them. The face – especially the nose – on this one was for instance flattened considerably. It gives him a strange look but I kind of like him anyway. 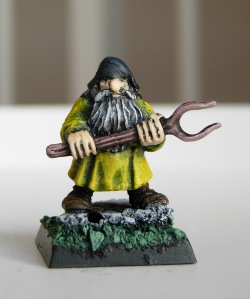 By the way, the concept for the bases is stolen from Jackael’s wonderful dwarfs.

Two hobby related things are also coming up. Next weekend Claus and I will go to Hamburg Tactica again, which I’m really, really looking forward to. Last year was a spectacular event and I expect this year to be nothing less. I also hope to do some good bargains – especially in the stalls with secondhand stuff.

The next thing is that I will be trying Warlord Paul’s skirmish “A bridge over troubled water” on March 27 with my pal Rasmus. It seems like a lot of fun and fits neatly, with minor adjustments, into our ongoing series (I dare not call it a campaign) of 3rd ed. Wahammer battles. I need to do some preparations for this, which I will be posting about during the upcoming weeks. For instance I need to make a river and a bridge, something I’m actually looking forward to. Well, more about this shortly, where either me or Claus probably also will return with pictures from the event in Hamburg.