I finished this bunch of pygmies for the Horisont Con in Odense two weeks ago. A fun little project which gave me a chance to work with African skin tones – something I only rarely have attempted. The lighting when taking the photos more or less screwed up my blending on the skin, making it all more or less chocolate brown, but that’s not how they look when holding then in the hand. Believe me. 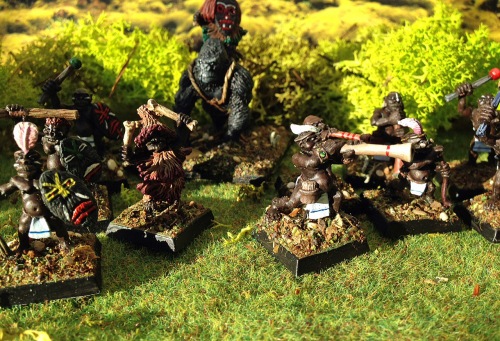 I know these pygmies are a slightly dodgy topic and surely totally politically uncorrected, but I take them in a pulpy vein like Vikings, medieval knights and such other stereotypes. 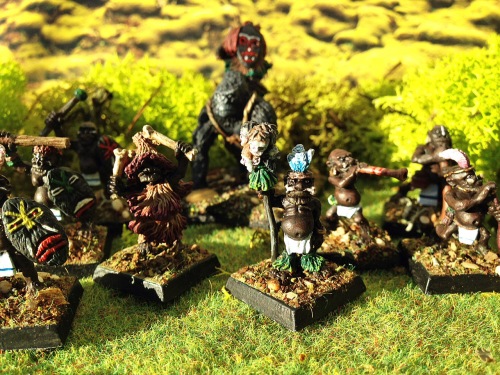 The miniatures you see are a mix of old Citadel pygmies from ’86 and pygmies from Kalistra (not sure when they were released). There is a marked difference in quality when comparing the Citadel ones to the ones from Kalistra, but they fit together nicely. This should come as no surprise, by the way, as many of Kalistra’s models quite obviously mimic vintage Citadel stuff. But, as said, they are much, much cruder in the sculpting. Nevertheless look fine once painted and they also come cheap, which the citadel stuff doesn’t. 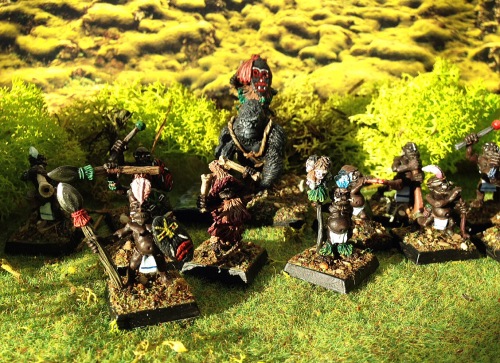 The gorilla-riding pygmy is the warlord Tiki-tu on Mumu, the fierce and slightly evil ape. A conversion I had some fun working on. For Tiki-tu I used a damaged pygmy  shaman from Citadel and his mount is from Foundry. 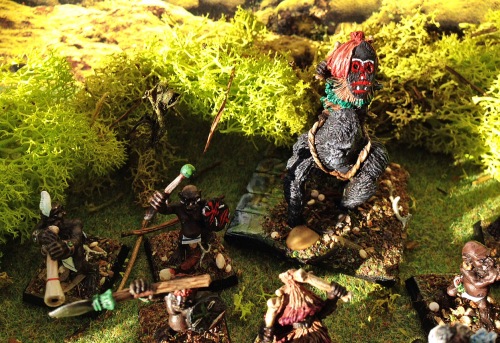 Hopefully I’ll be able to return next time with some better pictures. The lighting conditions aren’t great any longer, but maybe I’ll be able to catch a few moments of sunshine during the week.

Recently people wrote some blogposts about their old Citadel and Warhammer posters. Great stuff. By chance I came across this promotion poster for Citadel’s Dungeons & Dragons line of miniatures in my copy of White Dwarf no. 68 from 1985. Just take a look at it in all its John Blancheian goodness. It’s soaked in all that makes mining this Oldhammer stuff worthwhile.

I love details like the classic Blanche-flame tongues on the sleeves of the adventurers, the weird runes reminiscent of Tom Meier’s lizard men, on the armour of the monsters, the red eye of Sauron on the Orc/Goblin’s shield and the inscription “TSR” above the dungeon passage, as if saying – “if you want to go further, TSR is the gateway”. Brilliant!

If I had a geek room all of my own this poster would certainly find a place on the wall. I don’t though, so this glorious piece of 80’s fantasy artwork will have to remain snugly in the magazine. 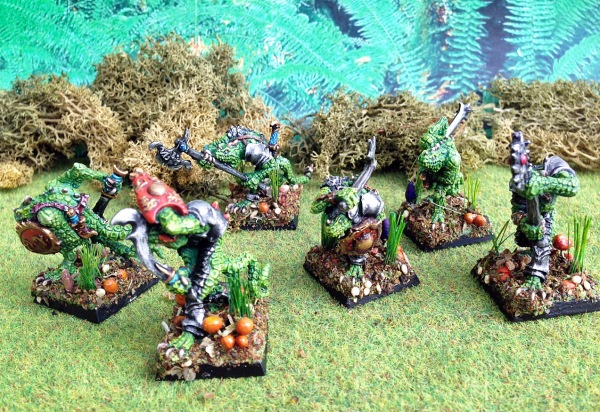 Back in April  I bought Tom Meier’s box of Troglodyte goodness. Sadly the miniatures were in a dire condition and needed some love before they were in a state to be painted. Luckily the good advice of Mr Phreedh worked nicely, although several things snapped off while in the acetone bath. I thus had to do some heavy restoring on the models –pinning and filling gaps with green stuff that is. The keen eye will thus undoubtedly spot some small adjustments on the miniatures making them slightly different from the originals. In order to make the restorations hold I had to change a few things, such as for instance the pole-arm blade on one. Nothing big, just small stuff. I guess that’s the price you pay when getting minis cheaply as a joblot on Ebay.

Disregarding the prep work I must say that I really enjoy these miniatures. They ooze cold, reptilian deviousness and pulp fantasy. What surprised me was how long it took to paint them. Having just painted Meier’s lizardmen I expected the Trogs to be as fast a paint –not so. Very likely because of their massive bulk; the scales took me forever to paint. But it was fun work and I’m pleased with the result. I’m quite infatuated with the impossible weapons, the runes odd shape of their gear. 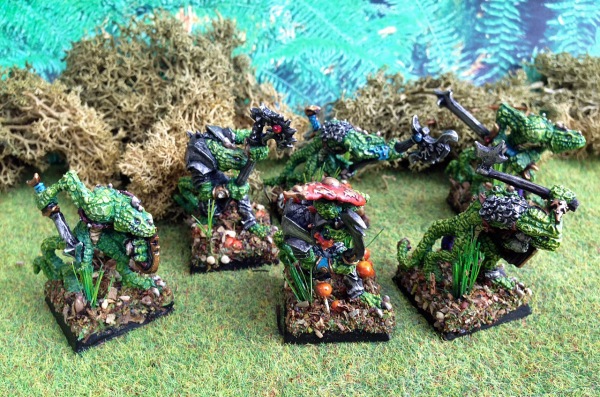 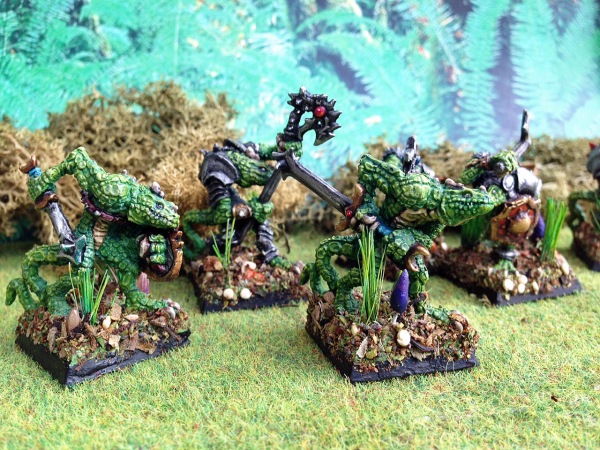 Next up I’ll show you some pygmies I finished.

Things have been rather slow when it comes to blog posts these lasts weeks. A nasty combination of much work and quite a lot of preparations for this year’s Horisont Con in Odense more or less stole away any chance to write about what I was doing. However, things have settled down now and over the next days I’ll show you what I and my sometime co-blogger Claus Kliplev have been up to.

However before we go into the Oldhammer scenario we presented, I here show you the amazons I mentioned in the last post. A selection of the great, great models released sometime around ’85. Is a fair selections of models from the range and I finished two models more for the scenario. Those you’ll get to see at a later stage. The remainder of the group will have to rest peacefully in my lead mountain until something inspires me to finish the lot.

These amazons are a wonderful bunch with a ton of wild character. The colour scheme I partially nicked from the cover of the Second Citadel Journal, where the amazons appeared inside for the first time, and the absolutely splendid paintjob done by Thantsants. All in all I’m rather pleased with the result. They weren’t easy to paint though. They are marred by quite a lot of flash, very thick mold lines running through faces and other important places on the minis as wells as some crude sculpting here and there. All of this is what you have to accept when dealing with pre-slotta stuff like this and when it comes down to it I in fact enjoy these small flaws as part of the character of the miniatures. There is a certain beauty in these imperfections which really appeals to me and I find myself drawn more and more towards this early stuff, where creativity seems to have reigned somewhat more freely than later in the 80’s where the conception of the Warhammer world began to find its form. 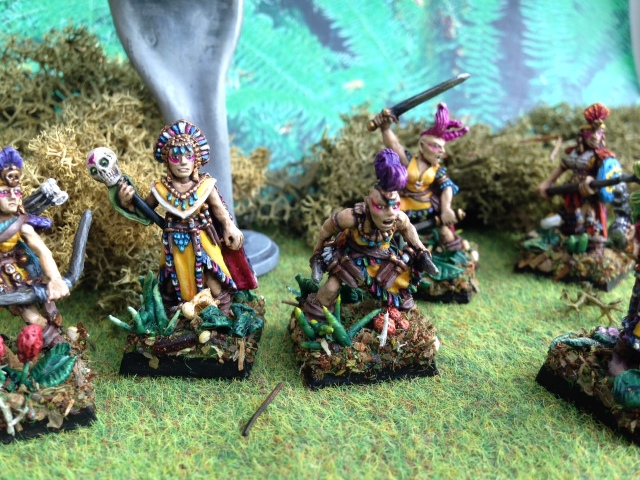 Well, that’s it for now. Be prepared for more posts soon. Up next is Tom Meier’s fantastic Troglodytes.