As I’ve mentioned a few times now we are going to play an Oldhammer scenario entitled In the Hall of the Ghoul King on September 18. Here the vampire Walther von Löwe is leading an attack on the elusive Ghoul King’s valley. Part of the combat is going to take place above ground; part of it takes place underground. The entrance to the Ghoul King’s hall is in the hill I have spent some time building over the last two weeks, working on it every now and then. I wanted something that looked a bit different from the usual stepped hills we use and thus went for a thing that looked a bit more centerpiece-like. Basically what I had in mind was a hill that looked like the hills with a tunnel through them that one sees for model railroads. A bit like the one below:

What I did was to soak a piece of cloth in watered down white glue and place the cloth on a core of stuff to give it shape. I then sprinkled the soaked thing with sand and dirt and left it to dry in the sun. Once dry and hard I removed the core, undercoated my hill black and started to paint it in grey, brown and green earth tones. Finally I added some flock and a bit of moss and the thing was done. On the last Pictures I stuck some skavens in there to give you a sense of scale. 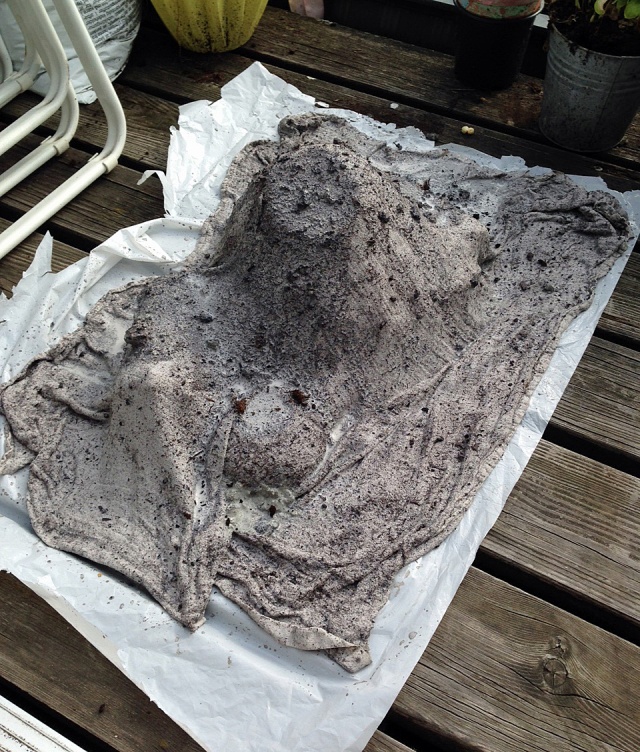 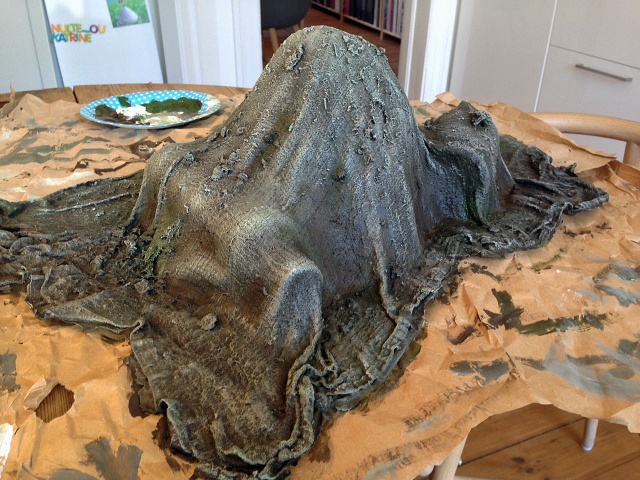 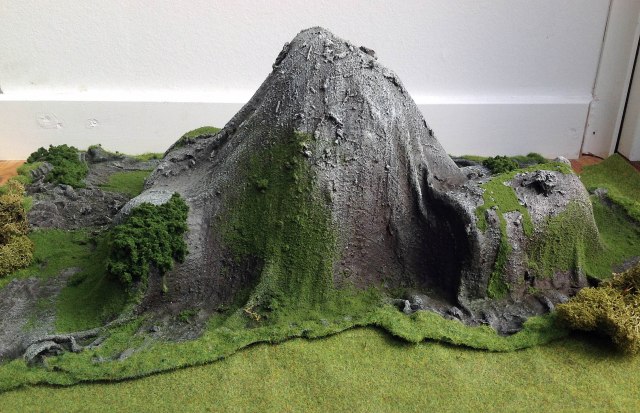 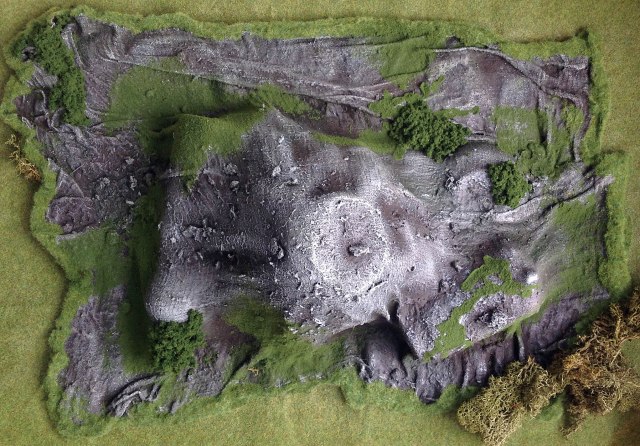 I’m almost satisfied with the result. The edges of the hill is gaping a bit too much, which is due to the glue I added afterwards to make the flock and moss stick. This is of course annoying, but I guess it is just me being a bit too obsessed with getting every detail just right. I bet you know what I’m talking about! In the end I know this is going to look great on the battle field and I’m really looking forward to setting up the game now.

I’ll be back soon with some of the undeads I’ve been working on lately.

By the help of the good people on the Lead Adventures Forum my ‘mystery piece’ is no longer a mystery. As it turns out it indeed is a Grenadier model, produced in ’87, for the Dragon Lords series of boxed sets. This one is entitled Encounter at Kohmar-Lolth. A great name isn’t it? Very Robert E. Howardian. The piece was sculpted by Andrew Chernak. 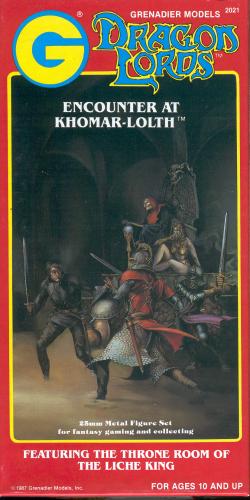 As I suspected two torches and even a crystal ball on a pedestal is missing from the throne. I’ll definitely have to try and make something similar once I get going at the model. As you can see from the picture below a lot of other stuff was also included in the original box, which apparently never made it into the collection I acquired last year.

I’m actually looking very much forward to get started on this model now. Keep an ey ut for the lich king of Kohmar-Lolth on this blog!

A while ago I bought this nice piece rather cheaply along with a lot of other odds and ends. And since we’re soon going to play a scenario with an undead theme (In the Hall of the Ghoul King) in September I thought it would be nice to use the model and give it a role in the game.

Well, I actually thought the piece was complete but once I had it stripped of its rather thick layers of paint, I discovered that something appears to be missing. There’s a hole in the left side of the base clearly intended for something – a torch or lamp perhaps – and a part might also have been snapped off on the right side of the throne.

Curious as to what is missing I attempted to find the miniature on Google but with no result. My initial feeling was that this must be a Grenadier model, but so far I’ve not been able to get this confirmed.

My question is thus if you can identify this mini and perhaps direct me to a picture of the whole thing in a complete state? 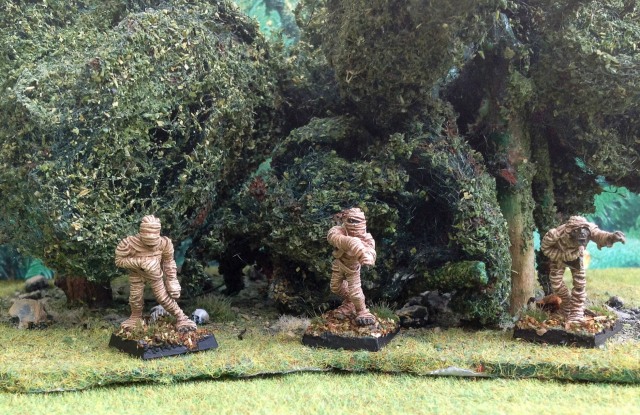 It’s all about undeads at the moment on my to do-list. Luckily this is a rather refreshing thing as I haven’t done that much in this department within the recent years. What you see here is three Citadel mummies. Lovely miniatures, aren’t they?

I really like their shambling posture and crumbling appearance. The mummy on the far right – with the slotta tab sweetly labelled “Mummsie” – was part of the small range to be used with Curse of The Mummy’s Tomb board game (1988), but also a part of the Night Horrors range along with the two other mummies you see here.

There is precedence for painting the skin of mummies in some bright blue, purple or green colour. This adds contrast to the otherwise very brown, muted colours of the bandages, but I prefer to go all in on the drab look and keep it subtle.

The mummies were certainly quick to paint, fun to work on and the result is more or less what I aimed to achieve. 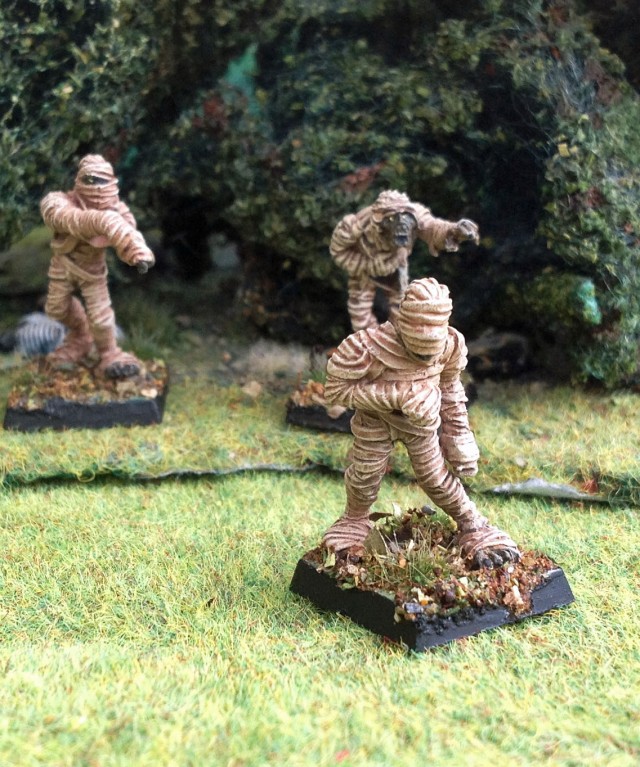 These three, large chaps are trolls from the illustrious Canadian company RAFM Miniatures, a company whose miniatures until the age of the Internet was something I solely knew from the pages of Dragon Magazine where they would usually be promoted and scrutinized in the “Through the Looking Glass” section. All three trolls were, to my knowledge, produced around 1988-89, but here I may be mistaken, as my knowledge about the company is a bit sketchy.

In September we’re going to play a scenario entitled “In the Hall of the Ghoul King” (more about this later) and the lads you see here will be serving as ancient, gargantuan ghouls who over the centuries have grown to enormous size on a diet of flesh, bone and marrow supplied by their elusive king.

I rather like all three models very much, but the horned one is my favorite. The miniatures is perhaps a bit crudely sculpted, but his face and oddly hulking posture combined with the long, thin limbs gives the mini a scary, almost surreal look. The two others though are great as well. I love the face and fat belly of the club-wielding one and the last, crouching troll-ghoul looks perfectly rotten. Nice! All of them had quite a lot of flash and some very obvious mold lines and they thus demanded quite a lot of prep-work before I could paint them, nevertheless I must confess, that I’m pleased with the result.

My favorite of the lot sold as a Plague Troll

This one is sold as an Undead Troll

This last one is simply sold as a Troll Warrior

A close-up of the bases