After having raided the pygmy village Malcon and his party continued in a northbound direction, following the trail which ultimately should lead them to a large lake of tar called Kukos by the natives in Tanaroa. The dense jungle surrounding the party was gradually beginning to change character, becoming more open and giving way to some hills and cliffs, however, no tar lake in sight. Continuing northward the group suddenly could hear the sound of running water, followed shortly after by some very odd bird calls. Clearly something was amiss and when the travelers beheld a stream of muddy water running through the jungle, across which someone had put a cloven bole, Malcom and his fellow knew they were approaching a trap.

Slowly they started approaching the stream and as soon as Daff, one of the henchmen, began walking across the water on the toppled tree, foul reptile men charged.

In this third chapter of our Isle of Dread-campaign Malcon and his party are being attacked by a mixed warband of lizardmen and troglodytes led by the nefarious snakeman Zzifth. Three lizardmen guards were hiding by the tree bridge while the remainder of the attackers entered the table from the flank. The scenario was a classic bottleneck situation made extra difficult by the fact that the two packmules had next to no inclination to cross the stream.

The rules for the scenario were simple; the main part of Zzifth’s warband, including Ziffth himself, would arrive on the table edge at a 6+ roll – the target number being lowered by one each turn. Malcon and his party would thus have some time to attempt to cross the water and get off the table before the majority of the reptile warband arrived on the scene. Fighting from the bridge was difficult (-1 to hit) and if hit, the model should make an Initiative-test or be pushed into the stream.

Moving through the stream was difficult, reducing movement to 1”. This applied for everyone except the small lizardmen, who could move freely in the muddy water. To get the packmules across the improvised bridge a Leadership-roll was needed. Something which worked fine for the first mule, but the second mule absolutely refused to move and blocked the bridge for several turns. Moving the mules trough the muddy stream would demand a Leadership-test for each 1” and the bridge was accordingly the preferred way across. The aim of the two forces was fairly simple; Malcon had to cross the table with as many men alive as possible, while Ziffth had to prevent this and kill as many as possible.

The game was great fun and ended in a big, bloody fight around the bridge. Two of Malcon’s henchmen succeeded in holding of the lizards for a while and thereby giving the rest of the party time to come across the stream. Sadly this heroic sacrifice led to the death of Henk, who did not make his recovery roll after the game. May he rest in peace.

It is funny to note how the crossbows really were a major force in the previous game, while they did absolutely nothing this game. Then again, our halfling thief Jolly Drake, suddenly did surprisingly well with his sling, killing several lizardmen in a series of surprisingly lucky dice rolls. Good times! Our next game in the campaign is schedules to mid-September. 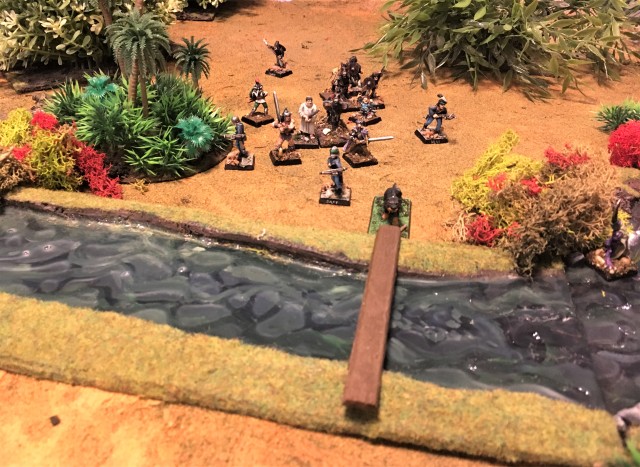 Kenza, the warhound, was the first to run across the cloven bole 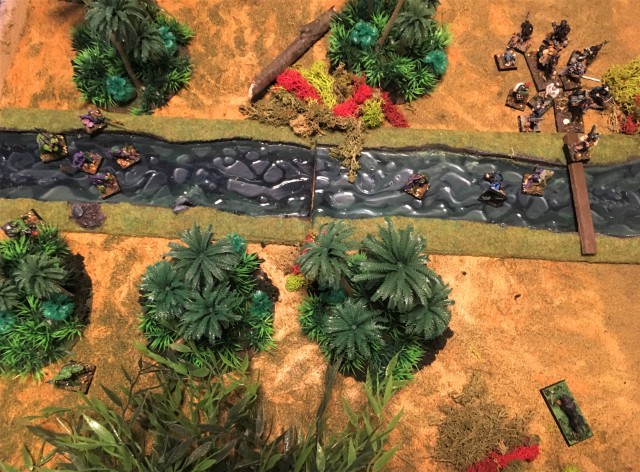 Daff was quickly downed due to the restrictions imposed on him for fighting from the bridge. The rest of the reptile warband was now entering the table 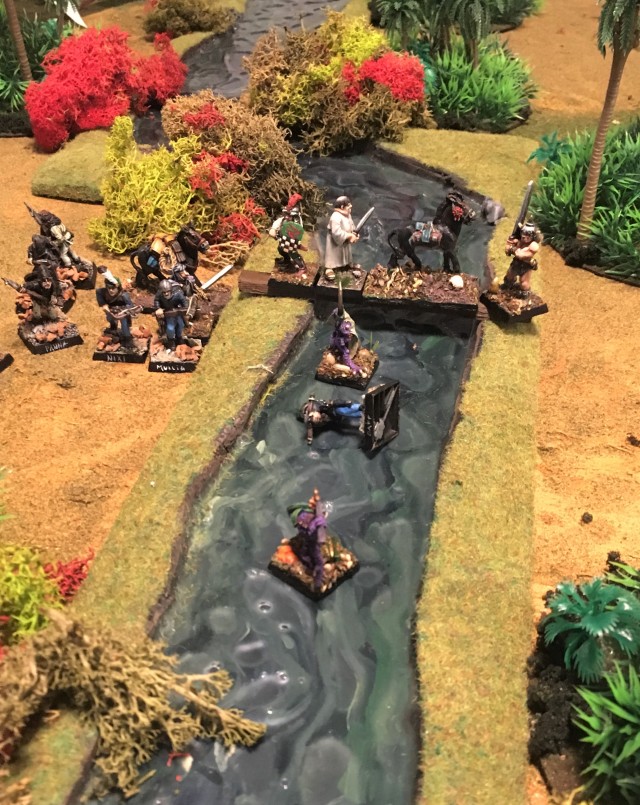 More of the party began to cross the bridge while being attacked by the small, fast lizaardmen

In the last scenario the party rescued the barbarian Ghimar and he was now leading the party across the bridge. Sadly Ghimar proved completely worthless in this scenario where he went down facing the first lizardman he faced 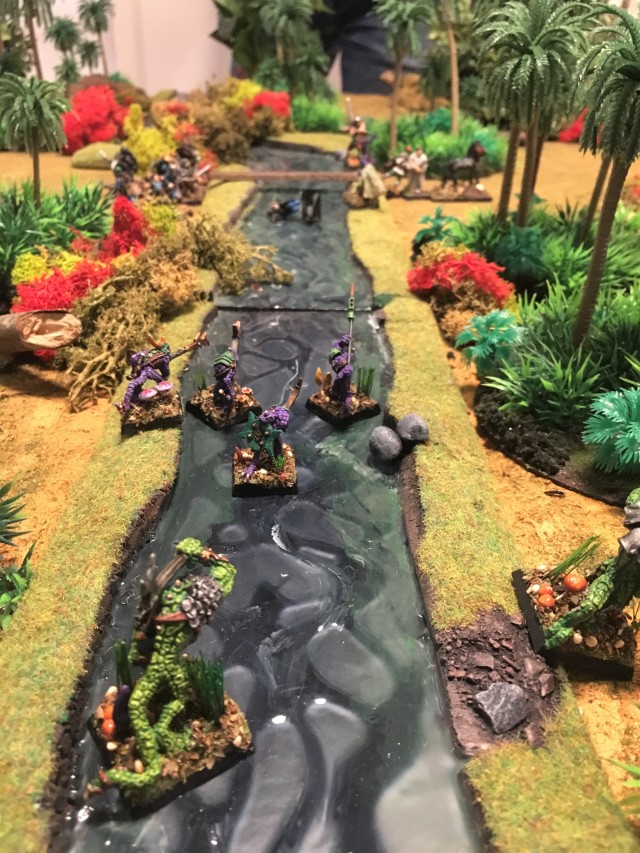 The first mule across thanks to the efforts of Peter the Melancholic. The rest still had to cross, while the reptiles came closer and closer

Without much help on his side of the river, Peter was soon charged by a fast lizard warrior 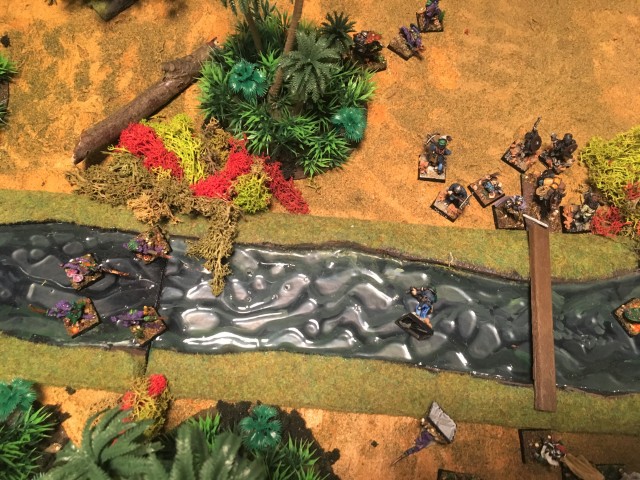 The champion of the reptile warband, the vile Zzifth, was now out in the open 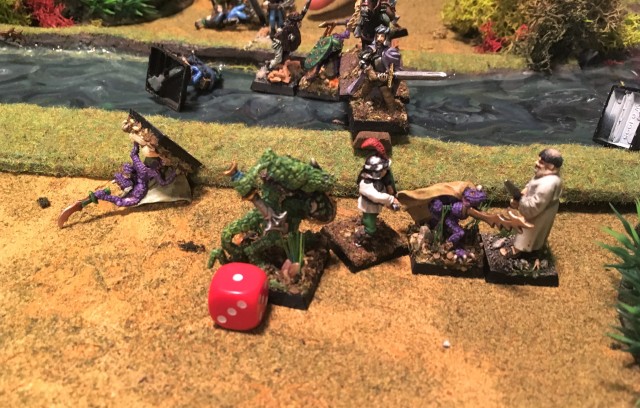 Ricco coming to Peter’s rescue. In the two previous games Ricco has been fairly incompetent and this game proved nu different! 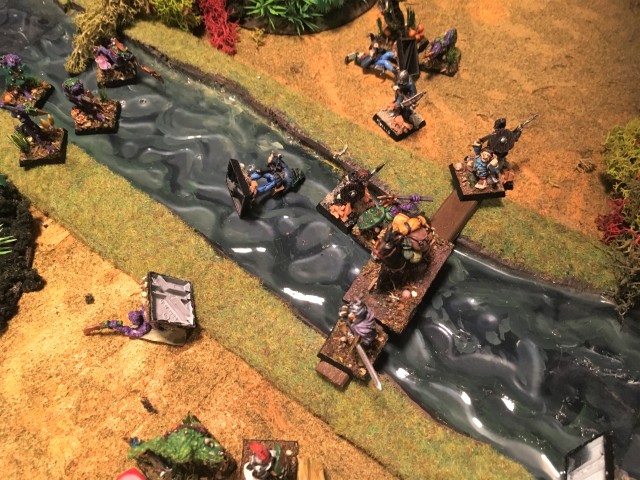 Finally Malcon got the mule across the bridge 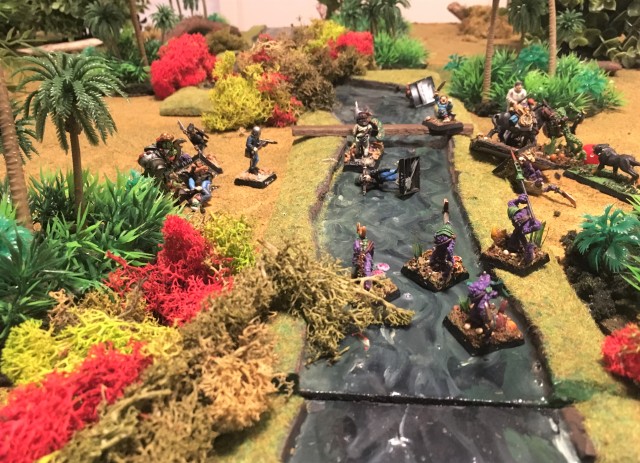 Fighting was going on at both sides of the bridge now 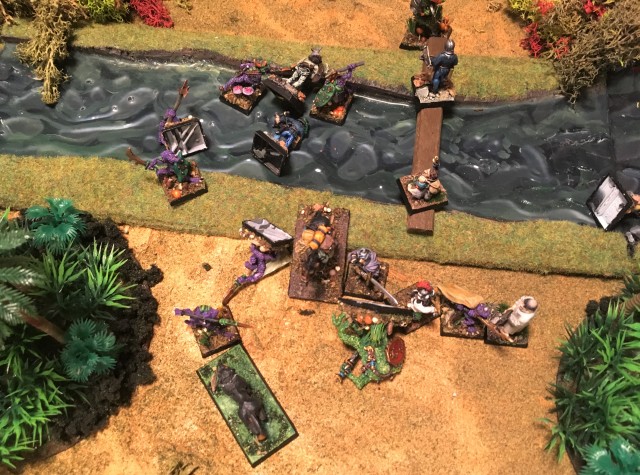 Jolly Drake fired his sling from the bridge with great effect 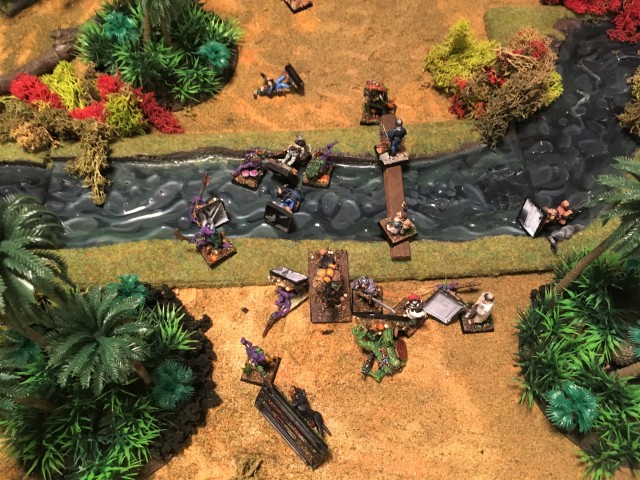 Malcon joins the fight on the other side of the bridge

A lumbering troglodyte approaching through the underbrush

A brave trog trying his dexterity on the bridge

Peter the Melancholic succeeded in gathering his magic and wounding Zzifth with a fireball. The snakeman was now angry 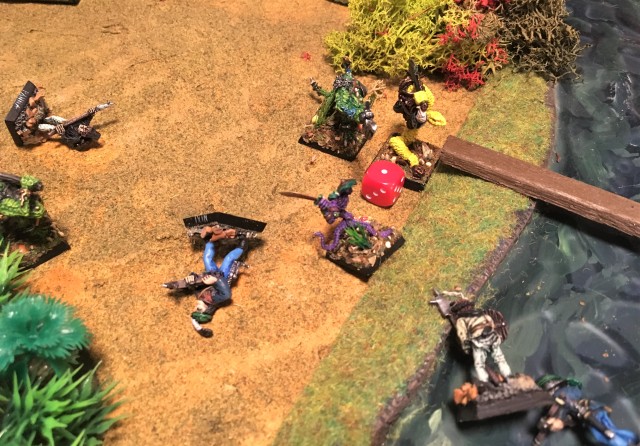 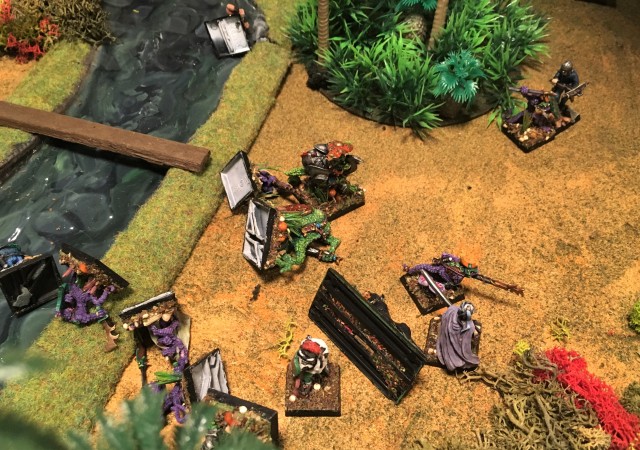 Zzifth succeeded in using his hypnotic gaze on Ricco, paralyzing him on the spot. Malcon thus had to run back and rescue his friend from the approaching lizards 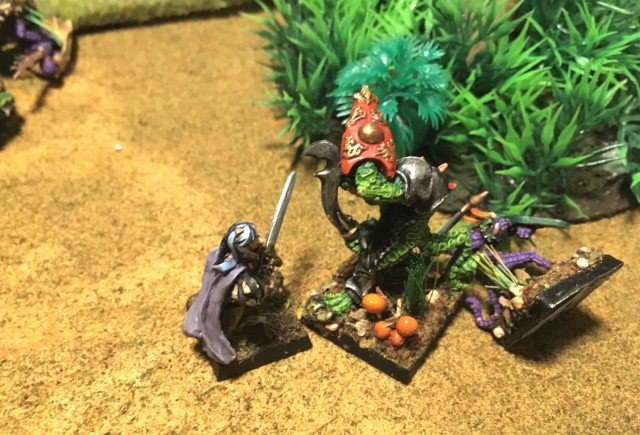 Malcon and his party leave the table, effectively winning the combat and leaving the very angry Zzifth behind. “We will meet again,” he shouted in his dark, reptile tongue

These two goblin wolf riders are off to join the rest at the pack I painted a few years ago. Now there is 12 of them. I had forgotten how time-consuming these minis are. At least I have a tendency to underestimate the time it takes to paint mounted minis – even such simply models as these wolves. But then again, I know that I am a sloooow painter. I cheated a bit this time though and went with some slightly boring, generic shields. Usually I prefer to do a bit more impulsive stuff on shields, but I guess I just wanted to be done with these two guys and get on with the rest of the greenskins still on my to do-list. 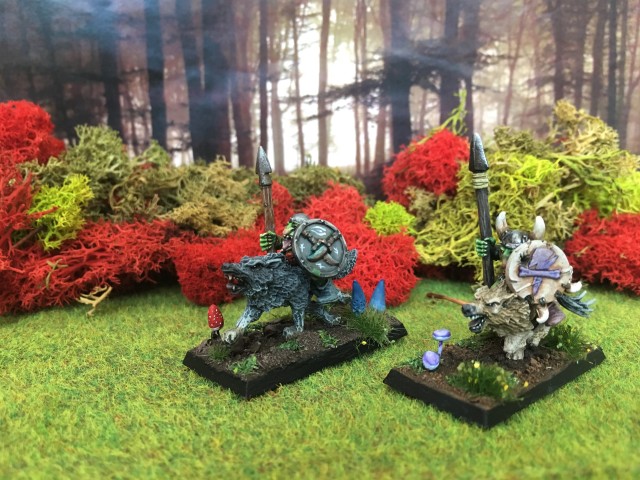 As I am writing this I still have six goblins and one orc to go, which should be fairly manageable given the fact that I need them to be done by October. However, I am really looking forward to paint other stuff and hopefully I will have these last minis finished soon so that I can focus on other things.

I will be back with the next instalment in our Isle of Dread-campaign soon.

As mentioned previously I am all about painting greenskins at the moment for a scenario we are playing later this year. So, as said, be prepared for a number of posts about orcs and goblins on the blog. Hopefully you won’t find it too dull. While I usually get bored when having to paint large numbers (more than four or five really) of the same type of minis in a row, the greenskins do a lot to help prevent burnout due to their fun, diverse nature. The orcs or goblin of the Perry’s and Adams are really an eclectic bunch when it comes to physiognomy and general look. Thus all one has to do is to vary the skin tone in order not having to paint the same green again and again and each orc and goblin by this really turns into a little world of its own; a quality which is lost in lost more recent greenskin models, I think.

What we have here in this post is troopers from two Citadel speciality sets. First up is an archer from the Harboth’s Orc Archers box, released in that golden year of ´87. I really love this set and always had a thing for bow units.

The second orc is of course from Ruglud’s Armoured Orcs, also produced in 87. I like the armour and iconic, weird helmet on this one, but his face is definitely not, at least to my mind, Kev Adam’s best work. Nevertheless, I think the troopers from this set work very well as a special unit. Their heavy armour does make them stand apart from most others orcs produced during the same era, making them really useful when one wants to portray a special, hard hitting unit, veteran troops or such things. Good stuff. 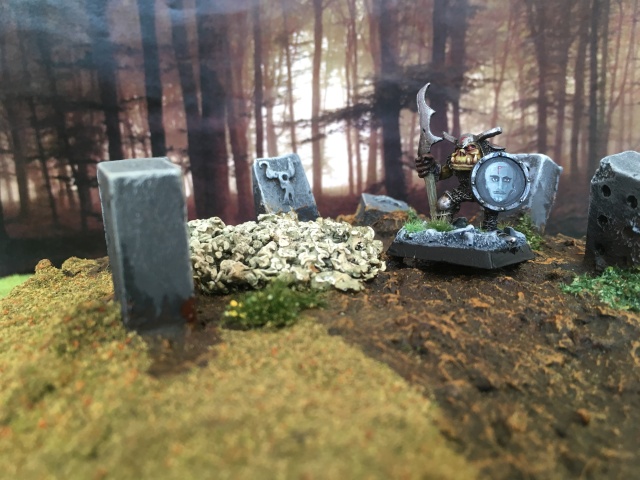