Here’s a little WIP; a rundown, dilapidated shack or hut. I find it striking that we put so much effort into giving our old school Oldhammer minis a wild, unruly vibe and then make the houses and buildings we field on the tabletop alongside these minis neat and very ‘proper’. You know, nice timber-framed houses and fortifications of even ashlars. It looks good, but at times I wonder what the rundown buildings on the outskirts of Old World civilization look like. Or how the houses in the war-torn lands of the Empire look in the poor villages struggling to survive.
Well, all of this has let me to start producing some houses in bad shape. One is already finished and two more are now on their way. I’ll post some images here on the blog as the work on these last two proceeds.

The house or hut you see looks pretty bad at the moment but it will come around. Basically I cut a piece of Styrofoam into a rough house shape onto which I have glued ashlars – also of cut from Styrofoam. To this I glued some wooden details (a door etc) made from balsa wood. More about these details at a later stage.
The thatched roof, which is yet to be trimmed a bit, is made from a piece of fake fur bought at the Danish equivalent of a pound store. It’s a cat toy actually. I cut the fur to fit on the roof of the house and then glued it on. After the glue dried I soaked the fur in watered down white glue to make it stiff and straw-like.
Once dried the entire thing was spray-painted black and is now waiting for the next stage. Exciting, right! … or perhaps not so much. 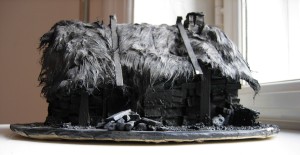