Two weeks ago I posted some WIP pictures of a chaos champion who is to star in the scenario ”In the Vale of the Small Jealous Gods”. An Oldhammer scenario Claus and I have decided to present at this year’s Horizon convention in Silkeborg in Novenber. There are still quite a lot of preparations to do for the scenario, but the first of four champions is now more or less finished. The base is, for instance, still needs to be done.

He still needs a name and proper background, but his chaos attributes are in place. This beautiful chap was thus blessed with a crown of toes (hidden beneath his helmet!), being very fast and having a huge head.  I have painted him in Nurgle-like colours but actually we haven’t decided on his allegiance yet. 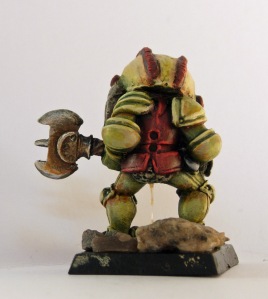 I have also begun preparing the next champion. A chaos dwarf with the following two gifts:  resilient and a skull face. I had to amputate two thirds of his head to give him his skull face, but the result – although not completely finished – is quite successful. At least I achieved what I set out to do, which with my modeling skills counts as a succes! More about this little champ soon.

There’s still a lot of work to do and most of it will probably end up on this blog at some point.